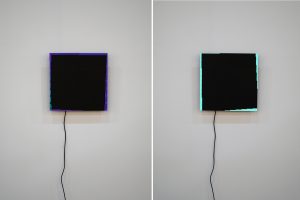 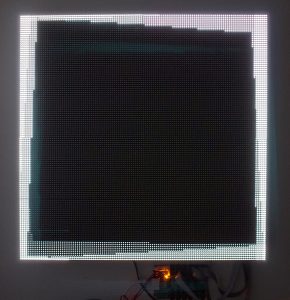 A couple years ago I was working in Times Square when the power grid failed. I ran outside and stood in the middle of Times Square and see all the great LED signs go blank. They all were, in the bright sunlight, huge flat-black monsters. The sheer number and variety of black oblongs was awesome.

When they are lit up, all that physicality disappears.  But when blank, I saw they are angled down for our optimal viewing but, paradoxically, they seemed to be looking down, at us. It was a powerful moment for me. When unpowered, they were vastly threatening, spooky, and replete with potential power; but, they were also oddly vulnerable and fragile, in an unfulfilled state. And it was that moment I remembered when trying to digitally translate or reinvoke a particular set of drawings by Robert Fludd.

In 1617 the pansophic, and mystical, scholar Robert Fludd published a book with a series of diagrams on the origins of the universe. One of those is a simple etching of a black square bordered on all four sides with the words “And so on [to infinity]”. The square is not a perfect geometrical figure, but a cross-hatched, almost-black, squarish rhomboid on a much-aged vellum page. It is meant to represent the nothingness that came before light and dark. The vast conundrum is in contrast to the slightly wobbly line, and due to the printing, the slight skewing of the square on the old yellowed paper; it is humbly beautiful. It is also thought to be the ancestor to all black squares in art.  This small black square was a diagram, is a drawing of the infinite nothingness from which even the division of light and dark came; it is meant to represent what came before not only light, but darkness as well. That kind of nothingness is beyond the edge of imagination and so naturally, a hugely tantalizing subject for making art. I wanted to recreate somehow that image of unimaginable nothingness, rendered with such matter-of-fact means in ink into contemporary digital context.

There are six variations of the “Fludd-square” works, generally called “Nothing Out”.  I draw (code) a border of either white or random-colored pixels around the edges of a square set of LED matrix panels. The border can be done in one of three ways; the thickness, brightness, and color of the border line varies as fast as possible (100 times a second), the thickness of the top and sides vary independently as fast as possible, and thirdly. the four corners of the square change position independently as fast as possible. The result is like an indefinite border describing, on average, a black square, and in the case of the last variation, it produces most closely the kind of skewed square of Fludd’s etching. But with the LED signage pieces, the center is not a black square per se, it’s a square without light. It’s black because the plastic support matrix is black but it’s a black square that is, and represents, absence and yet in that moment also make its physicality present. In the way Lawrence Weiner’s “removal pieces” work,  it’s a way of “looking at” an absence. But in the LED’s, the absence is simultaneously defined by the borders of active pixels of white or all-colors-at-once light, that in other contexts, also represent nothingness as well as the dumb fact that the LEDs are not on at all.

LED signage is something that commands attention – the low resolution, exploded imagery and text burst out with crazy luminage – it’s an imperative we spend a lot of time trying to ignore because it is so often trying to sell you something. As devices, electronic boards try to block out everything else in order to be the only photons you see – whether in huge video walls, billboards or bodega signs. But since we are so used to being sold something by these signs, it can take not just seconds, but minutes, or even hours, for the brain to realize there is something else at work. It’s the gestalt of marketing vs the experience of discovering meanings, even if that meaning is just looking at nothing. It’s a sign for nothing. And nothing is something our mind can barely grasp; it stymies the mind, stops its endless analysis. Nothing is something we can point to and maybe even circumscribe, but not really represent except obliquely and nothing pulls our minds in to a vortex of contradictions. In terms of art, that is about as fun as it gets. 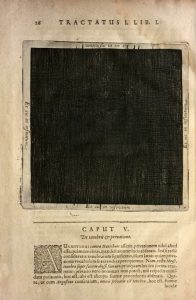