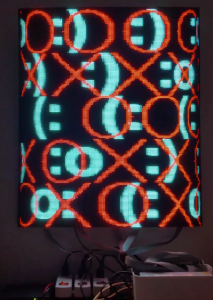 Counter-scrolling emoticons run against XOXOXXX (Hugs & Kisses) in rapid, never-ending streams that appear to be wrapping around a cylinder. The colors are sometimes RGB opposites and there are algorithmically made ‘blank pixels’, occluding the emoticons to simulate bad pixels in regular LED signage. These blank pixels also produce a kind of virtual depth that is similar to the pseudo-3D effect written into the scrolling. I am trying to produce a visual experience where there seems to be too much information to process at any one instance but which captures the viewer in the same way commercial LED signage tries to transfix passerby’s.